Forgery of granite stamp of Czechoslovakia depicted in catalogue

On page 291 of the MICHEL catalogue - Valuable Stamps of the World is depicted granite stamp as the price example from David Feldman auction. This is one of the postage stamps (one of the two on granite paper) which started forgery sale affair in the Czech Republic in 2011. Thanks to the initiative of both Infofila authors (Z. Jindra and J. Petřík) are these stamps marked and signed as forgeries on the back with a handstamp - faked overprint. 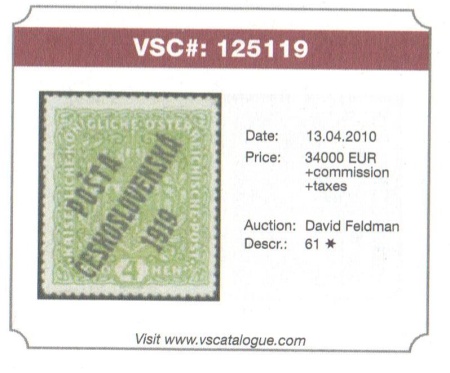 A scan from MICHEL catalogue - Valuable Stamps of the World

Publisher of MICHEL catalogue obviously can not be held responsible for showing sold auctioned stamps. It is not possible to be angry with the publisher as information from the Czech Republic about these forgeries to defraud the collectors did not reach them at all. The pricing is not disputable, but showing a revealed forgery is a problem. The collectors may compare it with their holdings and concluded they have or are buying genuine stamp. Therefore, we draw the attention on it more extensively. 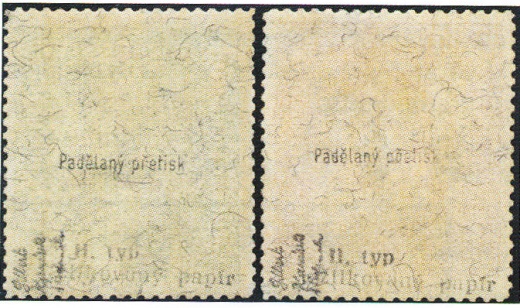 With the responsibility of David Feldman as the auction house, where these forgeries were sold lately, it is worse. In its defence it is necessary to mention that the stamps have expert marks of Gilbert and Karásek including a certificate – at the time reputable experts. Next, it is mentioned here that the provenance is PROFIL which increased their credibility for sale. There is, however, a big problem and information conflict. 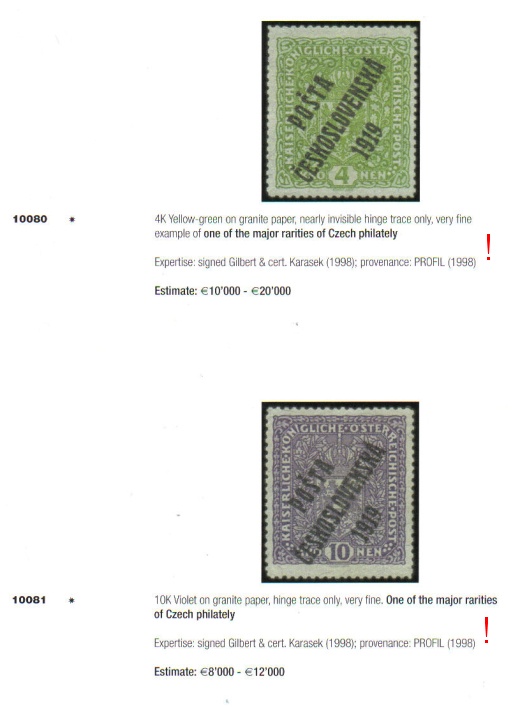 There is a complex dispute about the provenance PROFIL (1998) in this catalogue after revealing of forgeries. We try to obtain David Feldman expression of opinion and will keep you informed about the basis of his evidence about PROFIL provenance and the sale to Mr. Fishmeister in 1998. Mr. Fishmeister was known to maintain all purchase evidence about the stamps he purchased. We believe that David Feldman auction may prove this note credibly. We do not assume that so big and prestige auction house stands in need of fabrication of the stamp provenance.

It is also interesting to note that the stamps were not yet claimed as forgeries. It was stated publicly that the stamps were purchased by the same person who sold them in 1998 to Mr. Fishmeister. It is a question whether the difference in purchase price between 1998 and the last realization was met or it is only cover of the forgery seller. In the latter case, forgery seller did not have to pay the full amount of the sale, which was probably much higher than that of Feldman auction. At the same time, the seller of forgery was afraid of detection. The case is in light of this very serious.